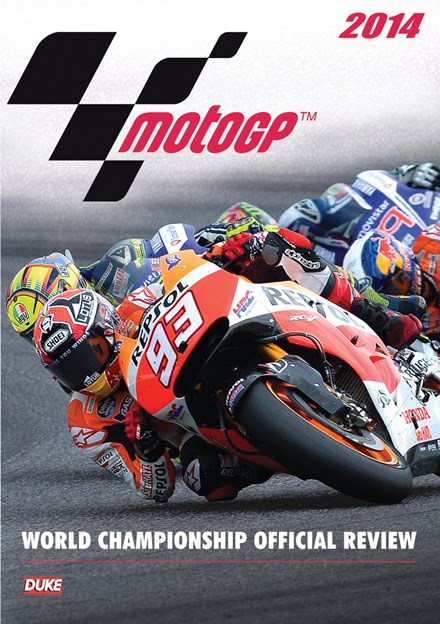 Get on board for the high octane excitement of the 2014 MotoGP season.

Marc Marquez stamped his authority all over the opening rounds as he won ten races on the trot, six of them from pole!

It was great to see Valentino Rossi pulling out all the stops to be on the podium on a regular basis, with two wins in the second half of the season to give him his best season since 2010.

Cal Crutchlow, Bradley Smith and Scott Redding even gave the Brits something to cheer about on occasion, including a first MotoGP podium for Bradley.

There's so much going on in a MotoGP season these days it's hard for the editors to decide what to leave in, let alone cut out. Dorna's guys and girls have done a great job on this review though.

Lean and mean, this DVD is all killer, no filler excellence you really can't afford to be without.

Full reviews of each of the 18 rounds, including Argentina and Brazil, superb commentary and loads of great interviews you'll be riveted to your seat from the start line to the chequered flag at the finish!

We have 22 guests and no members online